How to Transform Your Business with Flutter App Development Originally released by Google in 2017, Flutter is an open-source mobile UI framework. With its single codebase, it simplifies the development of native mobile and web applications. Flutter allows you to develop both iOS and Android apps by using the one programming language and codebase. There are two main components of Flutter: the software development kit and the user interface framework. The SDK hosts and compiles the code and the framework provides reusable UI elements in the form of widgets.

By using Flutter, developers can create iOS and Android apps simultaneously. The diverse UI library offers great personalization opportunities. Flutter uses Dart as its programming language and has improved significantly over the decade. Flutter is expected to take over mobile and app development soon and businesses need to be Flutter ready. Check out why this is the perfect time to transform your business with flutter app development and how a flutter mobile app development company can help you do so.

How Is Flutter Different from Other Frameworks?

The buzz surrounding Flutter seems to grow every single day. There is either a company that just released a new Flutter-based app made with Flutter, or they have switched over to Flutter, describing how it has changed development. Few of the best brands in the world are using Flutter for their apps. The endless list includes BMW, Google Ads, Alibaba, Cryptograph, Dream11, Nubank, Google Pay, and more.

Developing Flutter apps gives you a huge advantage over other frameworks due to its distinctive features:

There are many features of Java and other popular programming languages that are also present in Dart. Programmers can easily accomplish significant tasks using Dart. Dart is fast, easy to compile, and provides a rich user experience.

Programmers can use a single code base across multiple platforms since it is a cross-platform framework. So, both iOS and Android apps are developed simultaneously, while there is only one version of the code. When writing code for multiple platforms, this is a great alternative to native frameworks. Flutter allows you to create apps for a wide variety of platforms and OS, including Mac, iOS, Android, Windows, and Linux.

With Flutter, developers have access to a wealth of widgets to assist them in their creation process. A user-friendly interface can be created much faster and with a much simpler process using this. By using Flutter, you can build industry-standard UI elements that are automatically resized and repositioned based on the screen size, platform, and resolution.

Flutter: When to Use It and When Not To

As a result of its many advantages, Flutter makes an excellent choice for mobile apps. Still, Flutter isn't suitable for all scenarios. One such example is wearable powered by Wear OS, a platform in which not all Flutter features are supported yet. Applications that connect via Bluetooth to hardware devices are not recommended with Flutter.

A native platform is probably the best choice if you need a small app where every byte counts. As of now, the average Flutter app is over 4MB in size, which is bigger than Kotlin (539KB) and Java (539KB) apps. Additionally, Flutter lacks several popular libraries and SDKs despite having a large library and plugin.

Flutter offers a lot of possibilities for e-commerce applications. The Flutter Framework is certainly a game-changer when it comes to e-commerce, and it provides developers with some great features like templates, widgets, smooth testing, etc. that can result in development in record time. There are seamless interfaces between Flutter and top e-commerce frameworks and platforms such as WooCommerce, Magento, Shopify, and more.

How Well Does Flutter Work for Web Development?

Flutter also allows the development of web applications from the same codebase as Android and iOS with the best tools. Flutter is ideal for developing web apps due to its high compatibility with web technologies such as HTML, CSS, and JS. The process includes embedding the existing code into the browser and then deploying it to a server. If you are wondering how you should consider consulting a flutter app development company for the job. 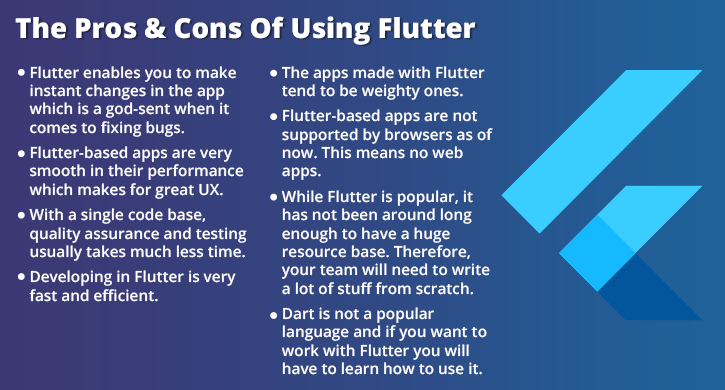 You can use these as the building blocks for stunning UI. When compared to other platforms, Flutter offers consistency and a unified object model.

Flutter is based on the concept of widgets and all elements on Flutter are widgets. Developers combine these widgets to create your desired layouts and deliver custom cross-platform applications. These widgets easily accommodate Android Material Design and Apple Cupertino standards at a considerably lesser time.

Considering that Google backs up Flutter and uses this technology itself, you can be sure that it will be supported continuously. Bugs are fixed immediately and enhanced when required.

In the beginning, every technology has its flaws. Only the immaturity of a new product and the uncertainty that it will develop can scare away the innovators.

The Absence Of Third-Party Libraries

A third-party library or package automates the development process so that developers no longer have to hand-code everything. The libraries and packages are often open-source, freely downloadable, and are tested for certain functionalities. Flutter might disappoint you when it comes to supporting 3rd party libraries.

The language often lags behind other technologies, notably JS, C#, or native Objective-C and Java. It is sometimes difficult to find new developers for your mobile team when they haven't picked up Dart. Considerations like programming language features and developer expertise should be taken into account when looking at a cross-platform solution.

In order to make an app compact, you must optimize it for size. An update of an app that doesn't force users to delete precious photos or music in favor of something else is much more desirable. Programmers reduce the size of their programs by minimizing libraries and packages, avoiding animations, and compressing images. But the development kit also plays a role in determining the minimum size of an app. The minimum size of a Flutter app is over 4MB because it has its widgets rather than relying on platform widgets. This is way more than that of Kotlin and Java development kits.

Why Flutter Is the Best Option For Startups?

No wonder, startups should and are considering Flutter for their cross-platform apps. This does not require them to sign different development contracts for OS and Android, as Flutter does that with a single codebase.

Flutter app development is a great way to increase developer productivity. Developer-friendly features like Hot Reload save a lot of time lost in compilation and making changes. Start-ups can use services from a flutter app development company and release faster launches and maintain the shortest time to market. Flutter allows flexibility in terms of the backend, so startups can still have Firebase as the backend and authentication tool and save the necessary funds while having robust applications. Apart from these, Flutter offers other integrations and thus will help startups scale at will.

Flutter App Developers At Expert App Devs: Why Choose Us?

Keeping a good relationship with our clients is one of our top priorities. With a team of the best communicators in the industry, we guarantee client satisfaction and superior service. Get in touch with us for Remote Developers, On-site developers, and Offshore developers and Offshore teams. Release rapid, efficient, and dynamic applications as a result of our creativity, expertise, experience, and knowledge.

Get in touch with us.

Is it expensive to hire Flutter app developers?

The average cost of developing Flutter mobile and web apps is $30-60 per hour. Firms with more technical expertise and time in the market may charge more, while firms with lesser experience may charge less. Moreover, location will influence pricing as well. It is common for Flutter app development companies in South Asia and Southeast Asia to charge less than those in West Europe and North America.

Which Flutter development company is the best in India?

From conceiving the idea to world-class support, Expert App Devs is one of the best flutter app development companies in India. We service both iOS and Android platforms. We employ proven development processes with a focus on ROI and adding value to your business. You can always reach us if you run into any problems with your app.

Where can you find the best Flutter developers?

Is Flutter the future of app development?

Flutter applications can shorten the process of developing apps and reduce their cost because they use a simplified interface. Flutter will remain an excellent choice for Android, iOS, and web app development considering its wide impact on application development.

Fuchsia OS by Google is widely utilizing Flutter to reach a wider range of devices and gadgets. With the growing importance of Fuchsia, Flutter must keep on getting more focus. This implies that when Fuchsia enters the market, your business will also be prepared for Flutter.

Usually, back-end applications communicate by endpoints, so it doesn't matter what language you use. With Python as the back-end and Flutter as the front-end, you can create a mobile application. Because of the backend's inaccessibility, you must develop APIs for this. Using the HTTP package, you connect to those APIs from Flutter.

To create a good quality web application, however, the UI must be tweaked and larger screens must be used more often. It might be more difficult to implement mobile apps that have native APIs, such as cameras and local storage, in a web application.